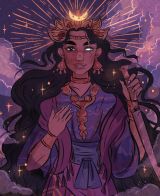 According to the Tagalog Mythology, Mayari is the Daughter of Bathala who is the Supreme Ruler of the World and King of the Gods. Mayari is known as the Goddess of Combat, War, Revolution, Hunt, Weaponry, Beauty, Strength, Moon, Night and Equality. She is the Sister of the Goddess of the Star Tala and of the Morning which is Hanan and to some myth by the God of the Sun which is Adlaw or Apu Laki.

In the Tagalog Pantheon she was seen as a Female Goddess in the Second Creation myth. But in some part of Central Luzon, Mayari was seen as a Musculine God such as in Pampangga and Zambales who was known as Apung Malyari.  As the Goddess of the Moon, Mayari was also known as Kulayiying or the moon shadow; Dalagang Binubukot or the cloistered veiled maiden; or simply as Dalagang  nasa Buwan or the Maiden in the Moon. Mayari is also venerated as the Goddess of Silver as she can bestow money, luck and prosperity to her faithful devotees.

In Luntiang Aghama, we view Mayari as one of the manifestation of the Supreme Divine Creator as we believe in one God that has multiple manifestation. As a devotee we Honor Mayari in our prayer and the song that you will hear on our sound cloud is sung during our Full Moon Ritual.

As a Supreme God, Mayari’s name means the Creator and the Owner. Mayari is a compound name that is composed of two tagalog words which is “May” and “Ari”.

The Word “May” has many different meaning such as in the term “may kasama ka sa buhay” or you have a companion in life; “may tao dyan” or there is someone there; The word “may” in the name of Mayari assured us that we are not alone. It give us hope that through Mayari we could always have something in our life.  While the word “ari” usually means possession or property. It also indicates our private part or genital organ which is our very own personal property. In the name of Mayari we can also see the word “aya”  or “kaaya aya” which means or the state of being pleasant or another meaning is to invite someone such in the phrase “ayain mo syang sumama” or “invite her/him to come.” Also in Mayari’s name we can see the word “Yari” which means to make or create. Yari is also sometimes used as a warning such as in the phrase “Yari Ka!” that is usually said to someone who done wrong. “Yari Ka!” literally means “you’re dead.” because someone will get mad at you.

With these we learn that Mayari is the owner and creator of the Universe. He give us assurance that we will not be alone in our life. That Mayari invite us to be part of the creation process and have the power of ownership and as a co creator in the Universe.  There is so much more we could learn from Mayari as she offers all of her blessings to her faithful devotee. Her Special day is Monday and we invite everyone of you to join us in our Devotion to Mayari everyday from 6:00 PM Philippine Standard Time at Luntiang Aghama Natural Divine Arts Shrine of Healing Inc. Lot 79 Phase A Francisco Homes Narra, City of San Jose Del Monte, Bulacan. If you have any prayer request and want us to work it out through our Daily Devotion to Mayari, please do leave a message to us by making comment below.