Yesterday me and Lakay Alsent Magbaya went to the Philippine Commission on Human Rights to attend the 2nd Community Meeting and Round Table Discussion of the Metro Manila Pride March 2019.  We go there as Pagan Priest and Spiritual activist to stand up for the Liberation and Identity of the LGBTIQ+ and the Pagan Community in General. The Metro Manila Pride March 2019 will be held on June 29, 2019 at Marikina Sports Complex and i am one of the Solidarity Speaker to deliver the message of Peace on that Day.

The theme for this year Pride March will be #RESISTTOGETHER and the pride will be expressing their resistance for the discrimination that the LGBTIQ+ community is receiving from the current mundane government. I was not able to speak up during the meeting because the organizer are focused on organizing the flow of event on June 29, 2019.  But during the Break, i was able to talk to the Event Organizer and have told them that the original Pride March took place in Bohol on 1621- 1622 as led by a Native Indigenous Priest named Babaylan Tamblot.  Babaylan is a title given to the native indigenous priest in the Philippines. They are the Priest who serves the Diwata or the Ancient Gods of the Philippine Islands. And we came and participate to this Pride March to continue the resistance of the early Babaylan.

Tamblot on the other hand was a native Babaylan of Bohol. He led the uprising and resist the new religion spread by the spaniards and fought against the subsequent conversion of the Boholanos to the Catholic Faith.

We people of Bohol like to live free. Now that we see our chance, let us not lose it. Of all Filipinos, we have the reputation, as well as of being the tallest and of the finest Filipino features, of being the stoutest hearted. Now the time has come to rid ourselves of the oppression of the Spaniards. Let us show our spirit and live up to our reputation.

The Gods of our fathers have provided us homes in these mountains and for all our needs. We are not dependent upon others. Food, yes and drink, too, are in the trees about us, and from the plants here our wives and daughters can weave clothes for our wear. Here happily we may pass our lives, freed from the burdens of paying tribute to the Spaniards and tithes to the church.

Our allies and friends will soon be coming to our support. Unfailing in courage, we have naught to fear. Who would not prefer death to the conditions of a Castilian conqueror?

See, rain is falling. Is not that evidence that the diwatas have not forgotten us? What could aid us more than this downpour which makes the firearms of our enemies useless? The battle is already half won.

All the archipelago is awaiting our action. If we win this day there is not a Bisayan who will not rebel. But if we lose those who desire to throw off the yoke of Spanish oppression must continue on under it, and we ourselves, whoever do not wisely choose rather to die fighting here, will have again to place our necks under that same yoke, harder than ever to bear.

These are the words of Babaylan Tamblot. It is clear from his words that people are being oppressed by the Spanish Colonizer. As i contemplate on his words, i ask the Spirit of Babaylan Tamblot and received his message and the story of our ancestors that in the old days before we are colonized, people are free. People are not identified as Men nor Women, but we are identified as a Soul that is beyond gender.  Thus we call our Mother and Father not through their gender pronoun but we call them as Magulang; and we call our brothers and sisters not on their gender name but as Kapatid.

Gender Indentification start during the Spanish colonizer. Thus even our Utencils they give gender to it such as La Kutchara and El Tinidor. The word “La” pertains to feminine and the word “El” for masculine. 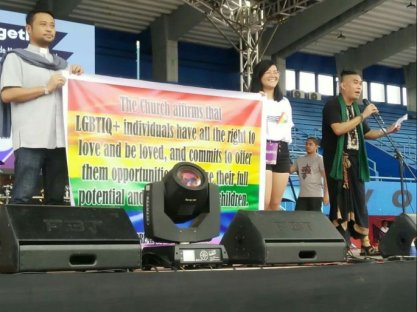 Discrimination start when the colonizer began to give us identification and this identification become our class. Social Classes has been established by the Spanish that separate us from one another. The rich become the higher class and the poor on the lowest class. So as being Gay and Lesbian becomes abominable in accordance to the Doctrine of Catholic Faith.

The Roman Catholic Faith start the oppression in our country that been followed by the Protestantism and Evangelical Movement.  The Conversion to new religion also requires us to have a New Christian Name thus our own identity have been lost in time.  Our old names are gone. Our Identity are gone. So as the Belief in our own God has been replaced by the modern religion called Christianity.

As a Babaylan of the Modern Time, we are standing once again together with all of the Nationalist Religious Movement as well as with the LGBT Affirming Churches of the Philippines to deliver the Message of Peace from the Spirit of our Freedom Fighters in the Past which is our Holy Babaylan.